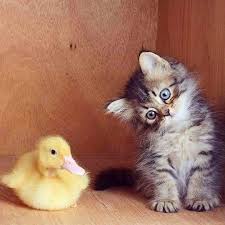 January 19, 2018—Kitty the Duck lives on a family farm roughly 100 miles from Brisbane, Australia. Her name is a reflection of her honorary status as the only duckling in a litter of kittens. Kitty’s mother duck left the nest while her original siblings were out roaming. When the farmers checked in, they saw that one egg still held a struggling duckling. They took it to incubate in their oven. That works, if you know what you’re doing. Soon, Kitty emerged. At first, the humans nestled the hatchling. But Altmann’s partner Phil had an idea. Unicorn the Cat had four new kittens. While they nursed, the farmers added an avian member to the family. Kitty settled right in, and Unicorn came to treat Kitty like her own.

Kitty the Duck’s video story.  Wonder if a Savannah Cat would do this?

Story thanks to National Geographic Society.